Not long ago, our public library did a large renovation and an entire floor was completely closed and furniture dispersed. This displacement meant that the computers were now in a more central space near the entrance. This more prominent location meant there was far less inappropriate viewing behavior, ie. anything you wouldn’t want someone accidentally viewing over your shoulder. I’ll leave that to your imagination. That said, there are many regulars who tend to sit at the computers for lengths of time. One of them spends his internet time arguing with people in the comments sections on Facebook. Unclear whether he ever knows the people he’s debating, but he gets heated. When he gets heated, he either 1) slams his fingers onto the keyboard, loudly or 2) hums, loudly or 3) hums, loudly and aggressively. When I say loudly, I mean audible from a great distance. He knows he does these things, and library staff (librarians and building monitors alike) have spoken to him many times about respecting the library computers and not disrupting fellow customers.

Another repeat customer I helped with his resume similarly had a volume modulation issue. Upon seeing me when he walked in, he would somehow not knowingly shout “HEY! TEACHER LADY! DO YOU REMEMBER ME? CAN YOU HELP ME WHEN YOU GET A SECOND?” I generally love working on resumes, but always felt a prickly sense of dread and wished that I hadn’t told him that I worked at a nearby school too.

Hip to the noise concerns of many customers, I was not the only one who felt dread and anger rise when certain customers spoke/shouted/watched videos without headphones. But as much as I despise those anxiety-inducing behaviors, one day I was proud of them.

A well-dressed middle aged white woman asked me a question at the desk, and, glancing at the row of people using computers, she asked me with a plain sense of disgust, “what are they doing on the computers?”

Pretending to be confused, I responded, “anything that you would need a computer to do…”

She scoffed. “But, why here? Don’t they have computers at home?”

Now, I didn’t have to pretend to be confused. Did this lady really just ask me that?

As calmly as I could, I said, “maybe they do, maybe they don’t, but we have them in order for people to use them.”

She accepted this, walked away, and I feared my explanation did nothing to pull her from her cozy privilege cocoon.

Some people do not have computers at home. Maybe they have one, but don’t have internet. Maybe they don’t have air conditioning, and don’t want to sit in their home as they apply for jobs for hours. Maybe they are using our databases to do genealogical research, or print out their boarding passes, or print out really anything! I was outraged that this woman had been so blatantly judgmental at the “riff-raff” who sit at the public computers, because it is their right to do so! The public library is for everyone! That is literally the point of our existence!

Now, though I do not myself spend time on Facebook at the library, I spend plenty of time on it at home. Last week, I did something that I ordinarily hate: I wrote about my feelings and shared it on Facebook. My perception of people who do this is that they are attention-seeking, craving validation, and emoting for emoting’s sake. Oversharers.

My intention was much simpler: I hadn’t felt like posting anything in two weeks, when I generally try to write at least once per week, and I couldn’t think of anything to write about except being sad. Didn’t even bother tying it to anything library-related. It was an off-brand, atypically personal post. And, I want to address the phrase “lightly depressed” that I used. I was not talking about the past two weeks of crying over my failed relationship. It had been a while since I was just plain sad about something specific, and I didn’t distinguish it as a separate entity from depression. Being sad can exist away from depression. I used that phrase not to diminish depression, because the point of depression is that it is not finite; it permeates through time and darkens joy. Depression is when you can’t climb out of the dark cloud. When I used the phrase lightly depressed, I meant my tendency of the last two years to say no rather than yes, to stay in rather than do any activity out of the house, to remain stationary when I needed to get up and moving my body. Functional depression, as I could always go to work, make dinner plans with friends and take trips to friends’ weddings. I wasn’t trapped in my bed for days, pondering the meaninglessness of life and futility of love like I have before. I just didn’t want to go to the grocery store or cook. 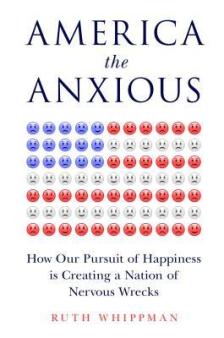 And Facebook is not the place to be when you are depressed. As a 30-year-old, I see a feed of baby photos, engagement announcements, weddings, pregnancy/career milestones and gorgeous views from hikes and vacations with smiling significant others. As I read in (the fantastic) America the Anxious: How Our Pursuit of Happiness is Creating a Nation of Nervous Wrecks by Ruth Whippman, people are likely to share the highlights of their lives on social media rather than the struggles, proclaiming their happiness and picture-perfect, filtered lives. The sense of inadequacy I feel when I see acquaintances’ posts is enough to make me want to leave Facebook. The happy is brilliant, blinding, and I can’t help but compare my circumstances unfavorably. And I did so, successfully deactivating for around a month in the fall. (I reactivated before my birthday so I could collect the yearly messages.)

The added nonsense of violated privacy agreements and Russian meddling and all the political posts (of which I am very guilty of sharing with many expletives) has prompted me to legitimately defend to myself why I am still using the site. Once, I wanted to hoard the photo documentation of years of my life, since people my age don’t generally have photo albums that aren’t digital. Now, I am moving toward cultivating non-attachment, so should be willing to let go of this (possibly vain and controlling) desire for a digital footprint.

But, now I have this blog, and I predominantly share it with my Facebook network. As a digital tree in the woods, if a blog is written but Facebook friends aren’t there to click on it, does it have a readership? There are ways to follow my blog (scroll up on the page and the word “follow” appears at the bottom right–click it!), but I want people to read what I write, and so don’t want to deactivate and lose the visibility.

Plus, the reaction I got from friends and family last week was pure and good. Many reached out, because as much as I can turtle and not want to talk about Feelings, I have an awesome support network who are there to help. An analog network, away from the internets.

So, thank you for that, reader-friends/loved ones! After a weekend accidentally spent completely analog and instead with stationery, meals with girl friends, meditation and reading in the park–as well as a brief surprise visit by Spring, I’m back in the writing saddle. And dedicated to using Facebook for its merits: connecting with a broad group of cool people I somehow know.

View all posts by flippingpageslikemad